Our Lady of Endless Worlds is a space opera novella series about faith and duty, redemption and revelation, and of course, nuns in a giant slug in outer space. 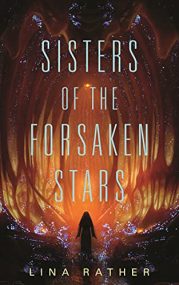 SISTERS OF THE FORSAKEN STARS

Not long ago, Earth’s colonies and space stations threw off the yoke of planet Earth’s tyrannical rule. Decades later, trouble is brewing in the Four Systems, and Old Earth is flexing its power in a bid to regain control over its lost territories.

The Order of Saint Rita—whose mission is to provide aid and mercy to those in need—bore witness to and defied Central Governance’s atrocities on the remote planet Phyosonga III. The sisters have been running ever since, staying under the radar while still trying to honor their calling.

Despite the sisters’ secrecy, the story of their defiance is spreading like wildfire, spearheaded by a growing anti-Earth religious movement calling for revolution. Faced with staying silent or speaking up, the Order of Saint Rita must decide the role they will play—and what hand they will have—in reshaping the galaxy. 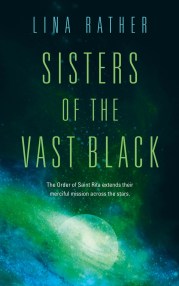 SISTERS OF THE VAST BLACK

Years ago, Old Earth sent forth sisters and brothers into the vast dark of the prodigal colonies armed only with crucifixes and iron faith. Now, the sisters of the Order of Saint Rita are on an interstellar mission of mercy aboard Our Lady of Impossible Constellations, a living, breathing ship which seems determined to develop a will of its own.

When the order receives a distress call from a newly-formed colony, the sisters discover that the bodies and souls in their care—and that of the galactic diaspora—are in danger. And not from void beyond, but from the nascent Central Governance and the Church itself.